Pastor Raynes was saved at an early age, when his family was living in Tampa, Florida, and attending the Tabernacle Baptist Church under the ministry of Q. C. Rollins. Then in 1971, God led his family to Taylors, South Carolina, where his father would pastor the Pleasant View Baptist Church for nearly thirty-six years. From his parents, he learned integrity and the value of a sincere walk with the Lord. And from his home church, he came to treasure the presence of the Lord and the life-changing power of the Word of God. 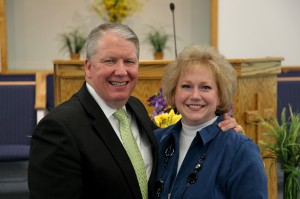 After nearly ten years in the banking industry in upstate South Carolina, Brother Doug began a sixteen-year ministry in Christian education at his home church. He was also involved in the youth, music, and Hispanic ministries of the church. In the late summer of 2009, God opened the door into a jail ministry which has been an important part of God’s continued work in our pastor’s heart and life. Then, as God prepared him for his current position as pastor of Progress Baptist, he, his wife Chris, and their four children had the privilege of ministering with preaching and music in churches in several southeastern states during 2009 and 2010.

On January 2, 2011, the Progress Baptist Church family extended the call to be pastor of the congregation, and another chapter of his life began. His passion is to build on the strong foundation laid by the founding pastor, Dr. Joe Cox, whose solid, Bible-based preaching is clearly reflected in the ministry. His desire is to preserve an “old-fashioned” commitment to Biblical preaching and worship that is still relevant in a day when evil is called good, and good evil. (Isaiah 5:20) His burden is for Progress Baptist to shine the light of the gospel into our community, our country, and around the world.

“To complete a thing, a hundred years is not sufficient. To destroy, one day is more than enough.” (Chinese prove… https://t.co/NdwhBsRxu1